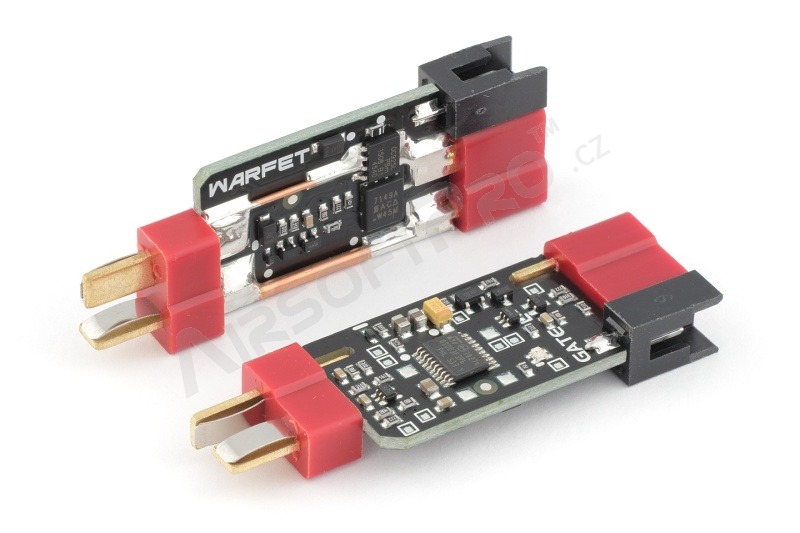 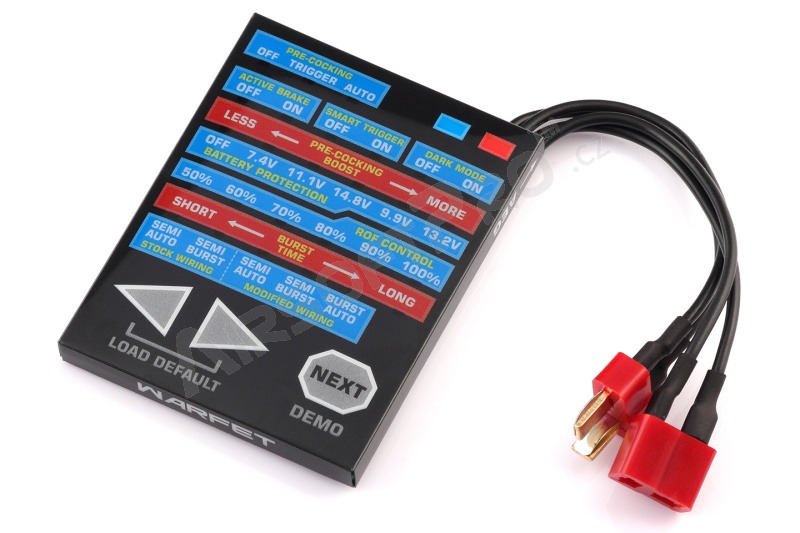 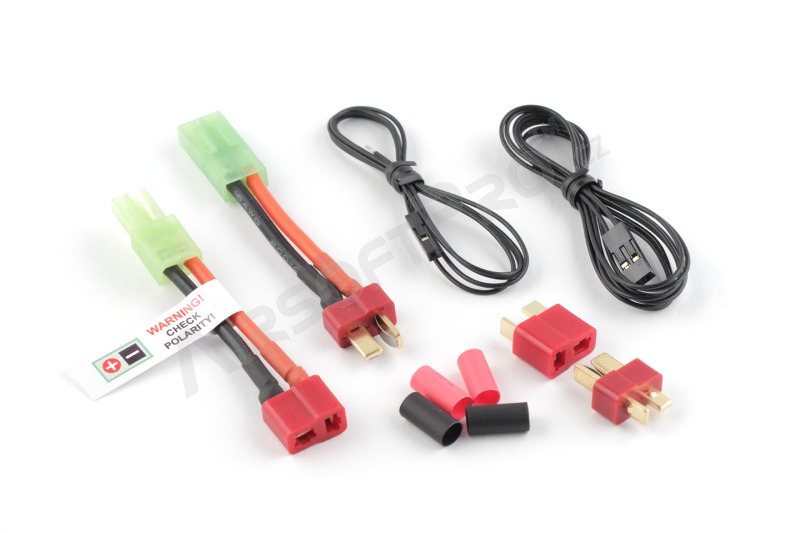 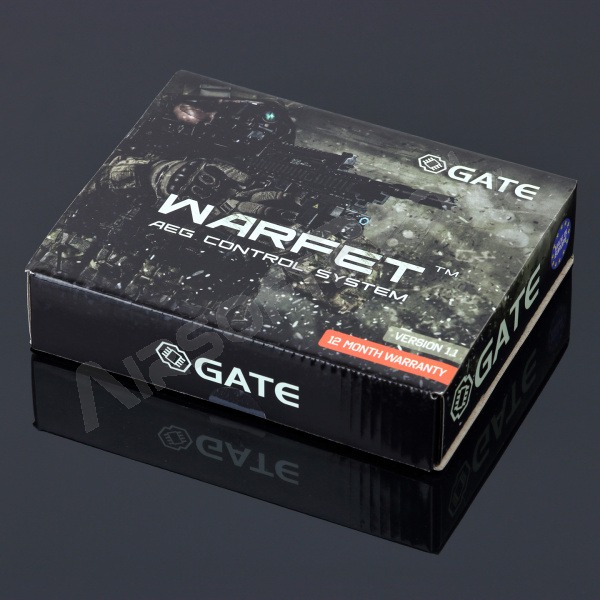 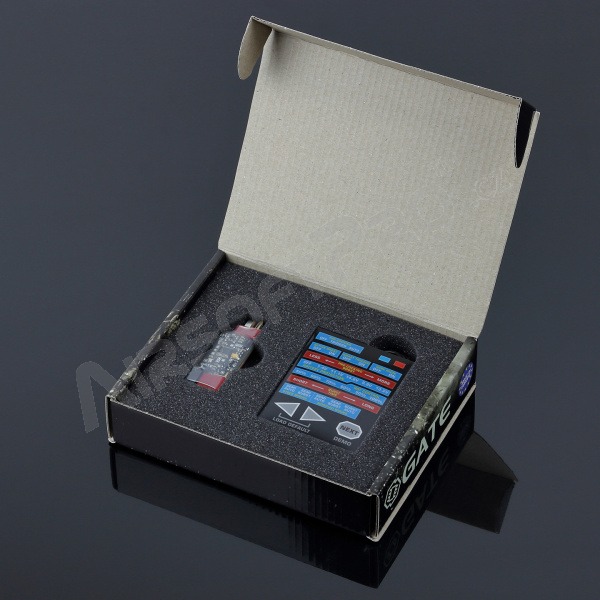 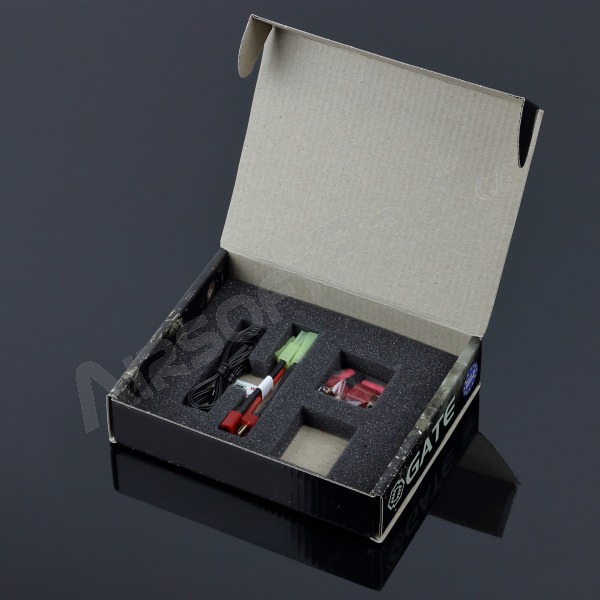 WARFET is GATE’s most advanced AEG Control System. It has 20 functions and almost 6 million possible configurations. The outstanding Tactical Programming Card provides you with very easy access to the WARFET Power Module settings.

Thanks to the Pre-cocking and Smart Trigger functions, you can achieve a trigger response similar to a real gun. The Programmable Burst (1-5 rounds) enables you to fire a pre-determined number of BBs, which is very useful in MILSLIM and for using low-caps. Another function is ROF Control, which allows you to reduce ROF, so you can use strong LiPo batteries, and still have ROF just like in a real rifle. If your AEG becomes jammed, the Smart Fuse protects the battery and the motor against damage. It also prevents deep battery drain. Moreover, with WARFET you get: Mosfet, ON/OFF Active Brake, Built-in self-test, Debouncing, and more. Improves battery life, ROF, spring life and gearbox reliability.

PRE-COCKING
Victory in the game is often a matter of fractions of seconds. Thanks to the PRE-COCKING, you gain a trigger reaction similar to a real gun. It allows for initial spring compression, which speeds up the trigger response significantly. You can set the time of PRE-COCKING using the Tactical Programming Card. There are two PRE-COCKING MODES:
1) AUTO MODE – the spring is automatically compressed after each shot
2) TRIGGER MODE – the first trigger action compresses the spring, and the second trigger action fires the shot

Please note: using PRE-COCKING increases wear and tear on the gearbox. PRE-COCKING is designed for SEMI mode. In the AUTO mode, it can result in blank shots.

PLUG&PLAY
Super-easy installation, just plug and play. No soldering required. All you need to do is connect the battery and the rifle to the AEG Controller.

PROGRAMMABLE BURST
The burst enables you to shoot a pre-determined number of BBs (1-5 rounds), which is very useful in MILSLIM and when using low-caps. You can transform AUTO MODE to BURST MODE or SEMI MODE to BURST MODE*. The Tactical Programming Card allows you to set the burst time. The AEG Controller automatically corrects the burst time according to the voltage level of the battery.
*SEMI to BURST in modified installations only.

3RD BURST
Burst mode enables you to make 3-shot series. In this way you can save ammunition and increase the realism. You can change AUTO mode to BURST mode or SEMI* mode to BURST mode.
If in SAFE/SEMI/BURST mode you release the trigger earlier, you can make one or two shots. The burst time is set in the menu with accuracy to 4ms. The processor actively compensates for the change in burst time with a decrease in the rate of fire due to battery discharging.
*SEMI to BURST in enhanced mode only

CONFIGURABLE FIRE SELECTOR
The function gives you the option to program your fire selector. There are five modes:

RATE OF FIRE CONTROL
This ensures there is no loss of the rifle’s rate of fire, so you can use stronger LiPo batteries, and still have ROF just like in a real gun.

SMART TRIGGER
It enables you to achieve a faster trigger response. It works with the ROF Control system. During the first shot, the microprocessor sets the ROF Control to 100%. After the first shot, it switches to a previously programmed value (e.g. 50%). As a consequence, the first shot is fired at a full rate of fire, and subsequent shots at a reduced ROF. The best results can be achieved by using a battery with a higher than standard voltage. For example, if you use a 7.4V battery, you can replace it with 11.1V. In this way, you will achieve a faster trigger response with the same rate of fire as with a standard battery. The Smart Trigger is most effective when the Burst time is set at 3 rounds.

BATTERY PROTECTION
Protection against Over-Discharge of the Battery. Modern LiPo and LiFe batteries are very sensitive to over-discharge. If you do not want to damage the battery and you care about its service life, this protection is indispensable. The microprocessor monitors the battery voltage constantly. When the voltage drops down to a critical level, the Controller will not allow firing.

ON/OFF ACTIVE BRAKE
The Controller provides you with the opportunity to decide if you want to use the Active Brake function. If you do not need this, you can turn it off easily. It will lead to improving the lifespan of your motor.

ACTIVE BRAKE
Do you care about realism? Would you like to increase the life of the gearbox? Does your rifle have such a high rate of fire that you are not able to make a single shot? The Active Brake sorts things out. In SEMI Mode, the brake does not allow for compressing a piston after a shot. The piston will stop in the front position which eliminates unnecessary stresses, increasing the service life of the gearbox and its parts. This is important, especially with an AEG power upgrade. After releasing the trigger, the rifle immediately stops firing. So, you gain more realism and, additionally, you do not waste your precious ammunition.

MOSFET
Do you want to achieve a higher rate of fire and faster trigger response? Are you planning a power upgrade of your rifle? In that case, you need a MOSFET.
It targets the energy from the battery directly to the motor, bypassing the mechanical trigger contacts. As a result, you gain a higher rate of fire of the rifle and a faster trigger response, and the contacts are protected against burn out.

DEBOUNCING
This provides full compatibility with the micro-switches. It ensures full resistance to contact bounce (vibration). You gain a bigger ROF, a faster trigger response and your MOSFET is less prone to overheating.

3RD GENERATION MOSFET
The advent of modern transistors and microcontroller has enabled us to create the smallest and most reliable AEG Controller on the market.

DARK MODE
DARK MODE allows you to turn off the green LED which lights up when a gun is firing. This function is especially useful during night games.

COATING
Thanks to its special conformal coating, it is resistant to atmospheric conditions (Military Specification MIL-V-173C).

14.8V LI-PO READY
The system can be used with batteries up to 14.8V LI-PO. Minimum operating voltage is 3V and maximum voltage is 17V.

MINI TAMIYA READY
Thanks to the Mini Tamiya Adapters included in kit, you will be able to smoothly connect AEG Control System to your original installation.

PRINTED QUICKSTART
It makes easier starting your adventure with a new product. The quickstart contains basic information and hints.

Included in the kit: